This weekend seven of us went on a 16 mile round trip hike on the Benton MacKaye trail in North Georgia. Eight miles out to a waterfall, set up camp, and then 8 miles back the next afternoon. It wasn’t easy, but it was a lot of fun. The weather just happened to be beautiful, too, and despite six 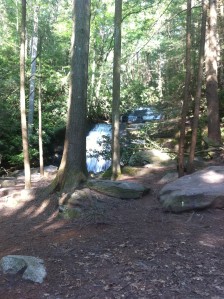 u-turns before actually arriving at our destination, we set out on the trail at about 1pm arriving at the waterfall at about 6pm. You would think that I wouldn’t have had any time to myself seeing as all seven of us were hiking together, but you would be surprised what some steep inclines with a backpack that is equivalent to a small child can do. Everyone gets really quiet and focuses on on their feet and the battle ahead. The next thing you know, you’ve been hiking for several minutes in complete silence. Nothing but the sound of trekking feet against the earths ground and the heavy breathing, coupled with the the occasional breaking of a twig here or there and its the ambiance of a hard days hike.

I had a lot of time to myself to think and I believe that’s why I really enjoying this weekend. Sometimes I wrap myself up too much in my own head and I start thinking the most outlandish things: cats wearing slippers, falling in love, hot chocolate on a cold, winters night with the snow dancing in little cyclones outside a frozen window; drinking wine on top of a Spanish hill top overlooking a vineyard as the sun sets on the horizon, playing darts with a drunken, sad clown in a foggy, windowless bar… Seriously, I’m the most non-linear thinker I know when it comes to thinking for enjoyment.

I have no f*ing clue.

Law school seemed like a great idea for a long time – but, was it just a seed planted in my brain due to the need to look and feel successful? Was it due to my surroundings of a brother-in-law who was in the midst of of graduating with his PhD from Yale? Was it because my ex-father in law was a professor at Georgia Tech or because the ex was overloaded in degrees from amazing schools? I truly feel that people are products of their own environments and I’m starting to wonder if my environment made me this high-strung, grouchy, bitchy person with this overzealous need to rub peoples noses in degrees and success.

I’m starting to realize that people didn’t like me because of who I was with. I actually had someone tell me (very recently) that they couldn’t stand me because of who I was married to. Honestly, they thought he was a pompous ass and therefore, I must be, too. That really hurt, actually, because they quickly followed it up with “I really like you a lot, now, though. You’re really cool!” I’m glad that that mask was chipped off and that they weren’t as shallow of a person to completely write me off. But, it’s what I imagine getting tail smacked in the face by a wet fish would be like. It’s like you’ve been fishing all day, and you’re really proud of this new catch. You’ve caught it, it’s yours and now you’re holding it between your two hands and the next thing you know it starts wriggling and you don’t know what to do! Then, as your face is all wet and slimy, and stinging a little, too, you realize you’ve been tail smacked.

I thought about how I’m so afraid of things. I would like to take this time to tell everyone that I am a puffer fish. I blow out, really big, and pretend like I’m fierce, strong, unafraid, but the truth is that all I am is full of air and that air is fear. I’m afraid of every new day and what new things are going to be thrown into my face. I hate that clinched feeling in my chest that says, “Sam, you’re going to fail. You’re going to fall flat on your ass and there will be nobody to help you get up”, but the funny thing is, I still manage to get up. Every morning, my eyes open and I have a new day to get through.

I’ve also realized that I’m incredibly stupid and, though I may not be an impulsive person, I do make very incredibly stupid decisions. I think, honestly, for so long I had to be so concisest, like a director of a symphony. Direct, precisest, in rhythm and in time, that when anything new and exciting came into my life and threw me off balance I couldn’t help breath in the smell of excitement and become intoxicated with its scent. It was only when I clamored my way back to the podium that I found my hair was in disarray, my head was spinning and I was anything but organized.

I thought a lot, between looking at the back of peoples feet, and leading the group, about how I can be an idiot completely beyond idiotic. Have you ever felt that feeling in the pit of your stomach that tells you that going after something may be the worse decision in your life, but sometimes, its just what you have to do? How it starts off as this little seed and festers into this huge, gigantic plant that is suffocating the life out of you. How it makes you grow weaker as it grows stronger – like a parasite, in its host, bleeding you dry of all your worth and though there may be warning signs, you still go after it? Yes. That kind of stupid. I am that kind of stupid.

Though, is it worth it, after all? Sometimes taking the plunge and going in head first is more fun, exciting, exhilarating and after all, you’ve only got one life…why not take it for what its worth? Why not dangle your toes over the fire pit – after all, you may not get burned at all! Then again, you may end up with scared, blistered, and charred soles.

There has got to be a balance between selfishness and self interest – and all of a sudden I’m having a hard time seeing that line.

I think I’d like to go back to daydreaming about cats in slippers. I’d like to go back to thinking about hot chocolate and winter months. I’d like to do anything but think about reality and how it’s staring me down like the teacher who just caught you cheating on a test. If I avoid it long enough, it will just go away, right? To my friend who has been telling me all along, hear me when I say this, you’re right and, I’m fixing it now.