Yesterday my Dad texted me and my little brother in a group text. The first line read, “Savannah is really sick.”

Savannah was my parents nearly 8-year-old black lab, border collie mix that I adopted in September, 2005. I was browsing the Atlanta Flying Disc Club’s forums and found a posting on their site about a puppy that had been found after a really nasty storm had gone through the area. They had found her crying under their front porch. They speculated that the bad weather had scared her enough to seek shelter. He took her to the vet to see if she had been micro chipped, and she hadn’t been. He posted flyers in the area – nobody claimed her.

Then he posted online because he wouldn’t be able to keep her and wanted to find her a good home. For anyone who knows the Frisbee community, they know that it’s full of animal lovers with a special soft spot for dogs. Naturally, I wanted a dog. Naturally, convincing my Mom to get a dog was a nearly impossible task. We had our fair share of dogs, cats, and even hamsters. I think my Mom was likely “animaled-out”, you could say.  I remember coming home from the Pet Store with my Dad as a small child with hamsters and the seething look she shot my Dad as I had seemingly convinced him that I would take care of it. My sweet eyes said one thing, my actions another. My mom, as ridiculously clean as that woman is, cleaned up after all of my pets. By the time I was ten we had seen a Doberman and two cats pass from our house and had acquired two more Dobermanns and a death-resilient tabby cat named Chuck – who, needlessly to say is still alive at the balmy age of 22.

However, my brother and I as a team make for very convincing children. Had we learned this earlier in our youth we could have been an indestructible duo, but alas, sibling qualms left us beating each other up instead of teaming together. But for this? We had our plan. To show her just how cute she was! Frankly, I’m sure if the ad had lasted any longer on the AFDC site she would have found herself a good home – which is why I acted fast. I had emailed the guy telling him I wanted her and to send me pictures well before my Mom had agreed to let us take home this puppy. My Dad was the easy one to convince – it was my Mom that was the hardball.

My brother and I decided it would be a good idea to print the pictures off and start showing her just how cute she was in hopes that she would cave. She did, not quickly, but that sweet face was just too much to ignore. My brother and I were botholder – we would actually be able to take care of a dog now. The convincing at this age seemed more believable. The pictures did the rest.

I was playing ultimate on a club team called Shotgun that year. We had track practices on Wednesday nights at Grady High School downtown in Atlanta. I arranged to meet the guy at Piedmont Park on the side that met up with Grady High School right before practice. For some reason, the pictures made her look bigger than she actually was. She was tiny. She couldn’t have weighed more than seven pounds soaking wet. Her tail was this long little helicopter blade that wiggled her whole body in excitement. She was quite possibly the cutest thing I had ever seen. Track practice hardly held my attention – I just couldn’t wait to take that little girl home.

And so she road, in my lap with her head on my arm, curled up in my lap asleep the whole ride from Atlanta to my parents house. Nearly a thirty-five minute drive and two minutes into it I was completely in love with this adorable little munchkin in my lap. When I got home she sat up in my lap with sleepy little eyes. It was the first time I would take my puppy into the house.

My Mom, my Dad and my Brother were all in the living room when I came in with her. And I put her on the floor where she wandered straight over to the rug by the door and peed. I think it was the only bathroom mishap she ever had in that house. Our entire family fell in love with her right away. She was the perfect pup.

She grew to be such a big part of our family. My mom named her – she liked the name Savannah. And it fit her so well. She became the lifeguard of the swimming pool – patrolling it faithfully for seven summers as we swam. She’d grab a toy and run in circles around the edge of the pool, barking if you went under the water until you resurfaced, and kissing your face when you swam to the pool edge. She had her grave yard of dead toys under the giant cypress tree that grew in the back corner of the backyard. She took over the bedroom upstairs, making it her bedroom, with a prompt bed time of 9pm that she gave herself. She wiggled, the same way she wiggled when I first got her from the park, with her entire body, when you came into the house. She would check the mail every day with my Dad when he came home from work. And she only took her cookies from you when she was laying on her pillow. She would curl up in the bed with my Mom and Dad for a little while, and played “ra-ra” when she wanted attention. She ate squeakers out of toys. She ate people food off a fork “like a lady”, because that’s just how spoiled she was, and she let you know when she was upset with you by laying half way under my parents bed so you could see her butt, but not her face. She had so much personality. She had so much life, and love. My parents loved Savannah.

She wasn’t just a dog. She was a family member. She was a Stovall. In many ways she was a third child to my parents. She was the perfect pup. So when my Dad called me today to tell me that he had brought home a whole chicken and some rice, because that’s what the Vet had said to give her to help her get some food in her, I wasn’t surprised. I was surprised that Dad was upset because when he came home, she wasn’t in any of her spots – under the bed, upstairs in her room, or on her pillow – but that he had found her laying under her cypress tree. He had found that she had passed away. In less than twenty-four hours from taking her to the vet because Dad suspected she wasn’t feeling well Savannah had passed. Dad just said, “She’s gone. She’s passed” in a quivering voice that send tears down my cheek.

What is it about the love of an animal that is so damn hard? For many, we lose people in our lives that have been with us for many, many years. Grandparents, family members, even long time friends – but what is it about animals that creates such an undeniable bond between us? I think that the love of an animal is the most unconditional love someone can find. To come home every day and be greeted by your faithful friend who loves you no matter what kind of day you had is an overwhelming sensation of happiness. You could have been laid off, in a car accident, done something ridiculously stupid, but as soon as you walked through that door, there they will be – beside themselves to love you and see you. They don’t care how much money you make, or what clothes you wear, or what deal you made that day – they care that you’re home. They care that they get to love on you and be with you. They are excited to see you and love you, and that kind of love is what people fall in love with. It’s what I fall in love with in the animals that I’ve had. In animals like Savannah and how, despite not living with her for most of her entire life with my folks, when I came home she wiggled like no other. She’d give me kisses. 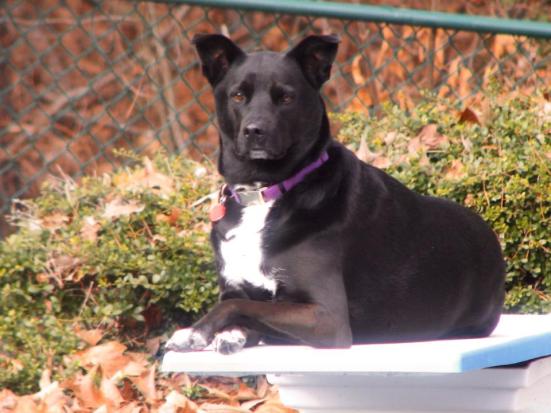 *Forgive the typos. I spent most of this blog post in tears.

2 thoughts on “The love of an animal”